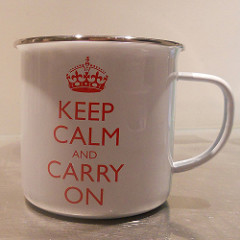 Keep calm and carry on – information from the accompanying info sheet: “It was 1939 and Britain was on the brink of war. In anticipation of this the British Government’s Ministry of Information commissioned a series of propaganda posters to reassure the polulation they would be defended at all costs.

The posters were to be displayed all over the country once war was declared. Using only the crown of King George VI this particular poster simply read “Keep Calm and Carry On”. It never actually made it onto the walls of Britain and was never officially issued.

A crumbled copy of the poster was however rediscovered by chance many years later amongst a pile of dusty old books in a book store in Northumberland, England.

This simple poster with its simple message is just as relevant today as it was back in the 1930s.”

Tito, he is a really nice person who has kind heart. I am very fortunate to have met him. He is a excellent immigration solicitor who is really professional.He has wide knowledge of immigration law.My case was not easy but I trusted Tito. He gave me lots of advice and helped me a lot.Now I have got my new Visa and I am very happy.There are some professional solicitors near us but I care about what kind of person he or she is so much.Tito, he is a humble, friendly and a helpful and hard worker.I really like him as a person.If you are thinking about which solicitor to visit then I strongly recommend Tito.
Many thanks Tito.

Tito was so helping with us. he told us what we can do so clearly. we now are sure on everything we can do so that we can live in the country that we want to. very polite and sweet man and very generous for giving all the advice for what we can do for free

Had a brief session with Tito, which was extremely helpful and understanding. Very professional and actually helped us more than any other source we tried. Already liked on Facebook! Definitely recommending this to everyone in need of legal advice.

With the help of mr Tito Mbaiti i enterd the UK and i got my 5 year resident permit . we are so pleased we met such a good lawyer and i highly recommend him as one of the best lawyer in human right and visa issues . Thank you so much mr Tito